When Mary Baker Eddy slipped on some ice and was injured on the streets of Lynn, Massachusetts, in February 1866, no one could have known that her subsequent healing would go on to spark a worldwide religious movement and propel Mrs. Eddy herself to the forefront of fame by the turn of the 19th century. But that’s exactly what happened, and today a monument to Mrs. Eddy graces the corner of the town’s Oxford and Market Streets—a marker that pays tribute to her stature as a “daughter of Lynn.”

On February 8, Lynn Mayor Judith Flanagan Kennedy held a rededication ceremony at this monument to salute Mrs. Eddy as a citizen of Lynn and to call public attention to her work. Attendees included members of the press and the public, as well as members of First Church of Christ, Scientist, Lynn-Swampscott and of other Christian Science churches in the North Shore area of Massachusetts. Lesley Pitts, President of The Mary Baker Eddy Library in Boston, was invited to speak alongside Mayor Kennedy at the ceremony. 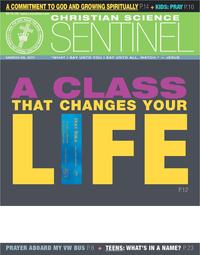