Europe is more than the Euro

From the Greek financial disaster in 2010, to an Irish bank debt crisis, Europe is struggling to rescue “a currency that is so closely linked to its unity that German Chancellor Angela Merkel recently said, ‘If the euro fails, Europe fails’ ” (“Crisis in Ireland tests eurozone vision,” The Christian Science Monitor, November 23, 2010). Is Europe more than the euro? What unites nations, countries, cultures? History? Geography? Money? The euro crisis poses deeper questions than vivid discussion of the so-called eurobonds, tax raises, consumer, public, and corporate debts and bad loans implied.

When the euro was launched 11 years ago, it was celebrated as the culmination of a vision of postwar Europe. Germany re-emerged on the international scene, fostering European unity, erasing borders, and dismantling its nationalistic past. Now the financial crisis is shaking Europe’s core and is calling for tremendous solidarity, patience, cooperation. A different kind of political and economic stability among a patchwork family of countries is needed.

Annette Kreutziger-Herr, professor of musicology and cultural studies, lives with her family in Berlin, Germany. 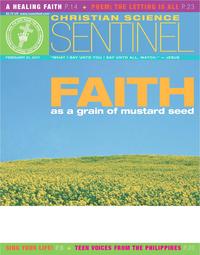