From secularism to atheism, Europe's religious landscape is changing.

A RECENT FRENCH parliamentary report called the wearing of the burqa—a full-length veil covering Muslim women—"unacceptable," and recommended that lawmakers forbid it in trains and buses, in state venues such as hospitals and public buildings ("What's hiding behind France's proposed burqa ban?" The Christian Science Monitor, January 27, 2010). The drafting of a bill and a parliamentary debate will now follow.

Many see being discreet with one's religion as a necessary part of being French. New immigrants are introduced to the constitutional concept of laÏcité, or secularism, through a short film depicting a church, synagogue, and mosque, followed by a smiling couple closing their front door to the camera.

Michelle Nanouche is a practitioner and teacher of Christian Science in Paris, France. 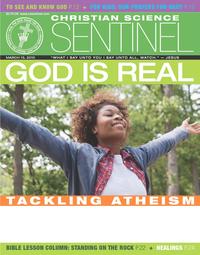