IN THE NEWS BUSINESS, the New Year traditionally has been a time of making forecasts of things to come. Reporters are called in to headquarters or surveyed by the home office for predictions about what might be ahead in the New Year. More often than not, they are wrong. Thus the time-honored journalist's joke, "Never let the facts get in the way of a good story."

But the facts are what remain important for each of us, and when one looks ahead to 2011, it helps to get the facts right. Establishing true thoughts as opposed to those that are ephemeral, spectral, or peripheral, is central and paramount in Christianity, and especially for Christian Scientists.

Walter C. Rodgers was a news correspondent in Washington, DC, Europe, and the Middle East. 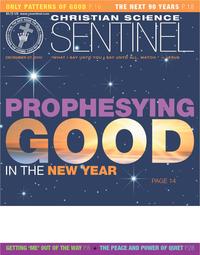