WITH ELECTIONS LOOMING , political discourse confronts us just about every day. And in an age of increasing political partisanship, it seems that just about anything goes regarding the tone of discussion in the political arena. In the news media, reasoned discussion often takes a backseat to confrontation, which spurs interest (and maybe profits). A recent op-ed piece I read even extolled the virtues of public figures expressing their opinions bluntly and with no apology.

While confrontation and controversy maybe entertaining, it is doubtful that it does much for public enlightenment. In fact, it frequently leads in just the opposite direction.

Ron Ballard is a Christian Science teacher and practitioner. He lives in Ashland, Oregon.

Send a comment to the editors
NEXT IN THIS ISSUE
IN THE CHRISTIAN SCIENCE BIBLE LESSON
ONLY BLESSED, NEVER CURSED 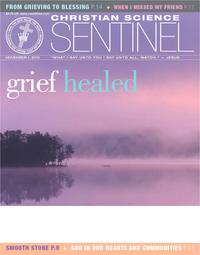