A NEW VIEW OF THE WEATHER

A RECENT ARTICLE in The New York Times began: "Given the weather of late, extremes seem to have become the norm. New York City just had its hottest June-to-August stretch on record. Moscow, suffering from a once-in-a-millennium heat wave, tallied thousands of deaths. . . Pakistan is reeling from flooding that inundated close to a fifth of the country" ("Weird Weather in a Warming World," September 7, 2010).

When I read stories like the one above, and my heart feels such compassion for the people caught in devasting weather conditions around the world, I'm often reminded of the following quotation from a noted newspaper columnist: "The most important power we have is the power to help select the lens through which we see reality."

Margaret Campbell is a Christian Science practitioner. She lives in Madison, New Jersey. 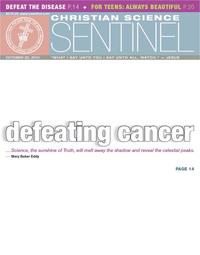