In an online discussion about video game addiction—which is an increasingly pressing issue, especially in Japan, Europe, and the United States—I came across this outcry from a young man: "I spend about 8–12 hours a day playing xbox 360. I know I'm addicted, but what can I do to stop?" It's a question many others may be asking. The millions who struggle with some form of dependency and are grappling with the devastating effect compulsive behavior can have on their relationships, school and work performance, and self-image.

Often what's behind such a dependency is the human yearning for a deeper sense of love and fulfillment in life. In a misguided attempt to fill an inner void, a person may dive into material pursuits that then seem unstoppable. But divine Love already fills that void. Love is always there to fulfill and satisfy someone's need. And as Sentinel founder Mary Baker Eddy wrote, "No power can withstand divine Love" (Science and Health, p. 224). Each individual is compelled, controlled, and influenced by this Love alone. Dependency on God is the spiritual condition of being. As the Sentinel's feature articles this week show, understanding this can bring freedom and healing, instantly, to even the most long-standing addiction. 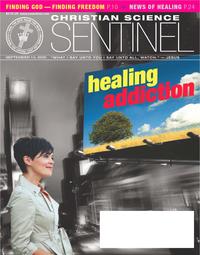