Crisis in Darfur: What prayer can do

Earlier this year, the International Criminal Court charged Sudanese president Omar al-Bashir with war crimes in the Darfur region of southwestern Sudan. This triggered a decision on Sudan's part to expel 13 international aid groups because they were said to be "spies" for the court. The expulsion has deepened the Darfur crisis by putting at least a million displaced Darfuris in danger of starvation ("Millions of Darfuris at greater risk with aid groups' removal," The Christian Science Monitor, March 11, 2009).

Since the crisis began in 2003, over 2.7 million people have become internally displaced persons or have been forced into squalid camps without clean water, sanitation, or reliable supplies of aid and food. The refugees have been imprisoned, tortured, starved, and assaulted. Some have migrated to the neighboring nations of Chad and the Central African Republic. 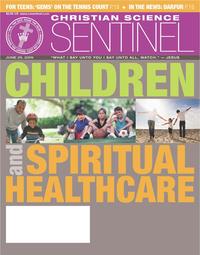