Have you ever wondered how you can know that God is really with you? There's a story that I love about finding God. It tells about a time long ago when Noah was building an ark.

All the animals had heard God was sending a flood. They were frightened, and they wanted to find God to talk with Him. So each animal went to the place where he or she thought God probably lived. Because the elephant was the biggest, he went to the biggest place he knew—the mountain. The eagle flew up to a cloud because it was the highest thing. The lion waited for a thunderstorm because it was the loudest, like his own voice, and he thought God would certainly be there. Each animal tried to find God and talk to Him, but not one succeeded. 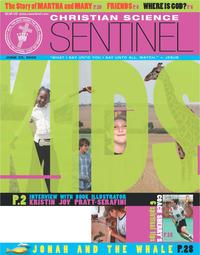