I love being outside, especially walking around my small yard, recognizing new growth, appreciating each lovely bloom, clipping, trimming, and weeding as necessary. Making order. But last spring and early summer, after spending time in my yard, I had itchy red welts on my lower body. This was an irritation, but certainly not a serious condition. So I just kept scratching and complaining. And then, suddenly, I had lots of welts and lots of itching. At that point, I realized I could pray about this. Serious or not, why should I put up with a condition that was clearly not made by God?

I considered a familiar Bible story from Luke about Jesus' travel back to his hometown of Nazareth. While there he announced that God had appointed him to preach and to heal. But many were angry at his claims and doubted his words. Jesus reprimanded them for not believing he was sent by God. And they were so "filled with wrath" that they threw him out of the city and took him to the edge of a hill, intending to throw him off. Yet the account concludes that Jesus simply passed through the mob unharmed, and went on to another city (see Luke 4:14–32). 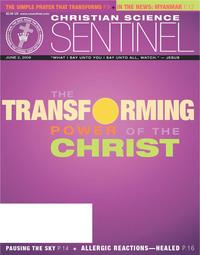