THE BULLYING started with name-calling and basketball stealing on the courts at lunchtime. Then my group of fellow eighth-grade friends began picking on almost anyone from the lower grades who crossed their path.

I was disappointed my friends were making the basketball courts such a miserable place to be. And although I wasn't participating in their bullying, I felt embarrassed to hang out with these guys. It seemed like they were copying a group of eighth graders from the year before who had also wanted to prove then "power" simply because of their age. Even though I didn't want to lose my friends, separating myself from them for a while seemed like the right thing to do.

Garrett Fielding is a freshman at Principia Upper School in St. Louis, Missouri.

Send a comment to the editors
NEXT IN THIS ISSUE
Article
CAN GOD HELP WITH TECHNOLOGY? 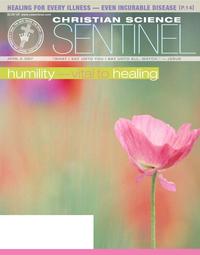