Iraq's refugees: homeless but not lost

According to recent estimates, nearly five million Iraqi people may have fled their homes, uprooted by the chaos, violence, and turmoil of war. Many are still inside Iraq's borders, and are referred to as "internally displaced." More and more, however, are emigrating as refugees, straining the resources of the countries immediately surrounding Iraq. Some observers point to this disruption as the greatest mass movement in the Middle East in almost 60 years. And these are not the only refugees who have lost their homes in their flight from war zones, persecution, or crushing political and economic regimes.

In the face of such conditions, one may feel helpless as yet another statistic is presented. But it is action, not helplessness, that is truly needed. Each of us can do something genuinely helpful, even if we aren't on the scene; we can take time to pray about our global neighbors.

Jeremy Carper is a Christian Science practitioner in Fredericksburg, Virginia. He was formerly in the diplomatic corps of the US State Department for many years. 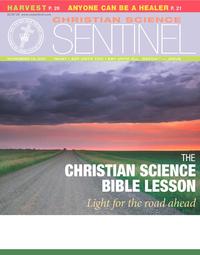