Straight to the roots

WHEN WE FOUND our house, we were attracted by its lovely old garden, despite the fact both house and garden needed lots of attention. The property had been rented out for some years, and the garden had become quite overgrown.

One afternoon, I decided to tackle an area behind one of the sheds. A large tree was choked with thick ivy vines. The ivy had wrapped itself tightly around the trunk and over the years embedded itself several layers deep so that the tree's bark was no longer visible.

Adrienne Kirkbride-Jones is a Christian Science practitioner who lives in Nantwich, Cheshire, England. 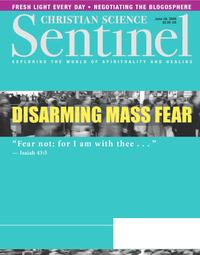