Occasionally, readers ask why a particular subject was covered on these pages. "Items of Interest" actually restored, in a new form, a feature of this magazine that Sentinel founder Mary Baker Eddy included in its earliest issues, from 1898 forward. During those pioneering years, the periodical's first page (sometimes first two or three pages) was devoted to "hard news" items culled from national and overseas news sources. Even after Mrs. Eddy launched The Christian Science Monitor in 1908, the Sentinel's news item pages continued to be published, well into the second decade of the 20th century.

In restoring "Items" to the Sentinel, our desire was to alert readers to developments of interest to anyone who might want to apply the spiritual insights found in the magazine's other pages to praying about specific issues of national and international import. We will continue to focus on reports showing how the fields of science, theology, and medicine are being leavened by Mrs. Eddy's discovery and the revival of Christian healing that her discovery launched. 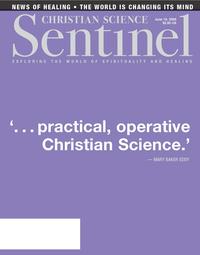