'NO WEAPON THAT IS FORMED AGAINST THEE SHALL PROSPER'

REPORTS YESTERDAY [July 7] of terrorist bombings in London turn many immediately to prayer and open people's hearts in compassion to everyone there. As I turned in prayer myself, this strong declaration from the book of Isaiah came immediately to thought: "No weapon that is formed against thee shall prosper" (54:17).

Terrorists believe that people will cower before evil, but in both the short and long term, there is evidence of the fruitlessness of such actions. When I think back to my own experience in New York City, I am all too often reminded of the destruction and loss of life, but when that tries to settle into my thought, it is overwhelmed by the stronger memories of the compassion and strength, the sacrifice and humanity, that filled the city during those difficult days and months after 9/11. 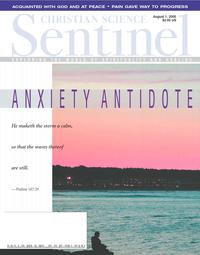