The December 6, 2004, issue of the Sentinel was so interesting that I was unable to put it down until I had read it from cover to cover within a few hours. "You are exempt from the flu" by Rosalie E. Dunbar was giving me total relief from an allergic reaction. "Refuse consent to disease," a paragraph heading in Rosalie's article, is one I won't forget in my study of Christian Science. "Sickness doesn't have the last word," from the editors, gave me hope of freedom from all allergies.

On December 31, 2004, at 7:13 a.m. while I was riding with my three-year-old daughter to the local market on a motorbike, three big dogs were pursuing each other, and they ran across our lane just too close to put on the brakes. 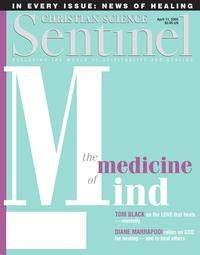