Wouldn't It Be Wonderful To Wave A Magic Wand and command the turbulence to stop in today's world the way Jesus once commanded a storm, "Peace, be still"? Wouldn't it be grand to see storms of terrorism, genocide, political divisiveness, disease, and poverty settle into some semblance of calm, like the scene after Jesus quieted the winds? The Bible describes what happened: "And the wind ceased, and there was a great calm" (Mark 4:39).

Today's news makes stillness in ourselves—let alone in the world—seem a distant dream. Like compounded interest on a loan, each day's news serves up images of ever-more-acute violence, and more chronic despair. Upcoming national elections around the world, along with long-delayed municipal elections slated for December in Palestinian-governed territories, and the anticipated January ballot in Iraq, offer hope of improvement. At this stage, though, the turmoil surrounding these elections adds an air of uncertainty to already dire circumstances, rather than a guaranteed path out of them.

Tony Lobl frequently travels in Europe, and between the US and his home base in London. 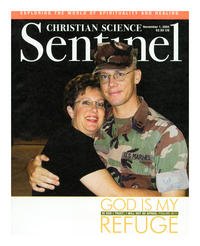