When I Was A College Student and just beginning to study Christian Science, I united with the Church's worldwide congregation, known as The Mother Church—The First Church of Christ, Scientist, based in Boston. It was only after several years in the armed services that I settled down as a young adult. By then, I was eager to become a member of a local branch Church of Christ, Scientist, and, in fact, over many years and living in several cities, I have belonged to five different branch churches.

I was so eager to be active in my first branch church (at a time when I had both a limited budget and a limited civilian wardrobe) that I still remember the money I "invested" in the dark blue suit that was then required of anyone who wanted to serve as an usher.

Richard A. Nenneman is a former editor-in-chief of The Christian Science Monitor and author of Persistent Pilgrim: The Life of Mary Baker Eddy.

Send a comment to the editors
NEXT IN THIS ISSUE
why unite with CHURCH?
There's Something In It For You—And Others 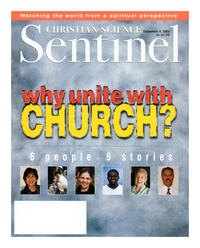