One year on vacation We traveled to a small village with hot springs, two hours from Bogota, for a family reunion. I returned to Bogota the next day, because I had to work. The following day I was told that my mother and niece, who had stayed at the village, were in the hospital, because they had apparently drunk some contaminated water. That day I did not feel well, and some co-workers even suggested I go home. But I decided to keep working.

When the symptoms worsened, I decided to pray, and began to think about "the scientific statement of being." The first lines read, "There is no life, truth, intelligence, nor substance in matter. All is infinite Mind and its infinite manifestation, for God is All-in-all" (Mary Baker Eddy, Science and Health with Key to the Scriptures, p.468). This made me think of God's totality and of the spiritual origin of all His creation. And I realized that the material appearance of things must be unreal. 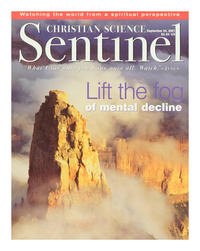