Here's a startling new reality for the 21st century: Anyone can be a journalist. It's never been easier to distribute facts and ideas far and wide. All the new and inexpensive technologies, such as the Web, computer publishing, and local community radio, provide almost anyone with a super-sized soapbox to express news and views, whether it's in the neighborhood, in Nigeria, or on the Net.

The question is, though, exactly what is news? And how should it be expressed?

Clayton Jones, chief editorial writer for The Christian Science Monitor, has been with the newspaper for 28 years with postings in Boston, Washington, Manila, and Tokyo. As foreign editor he oversaw the Monitor's Bosnia coverage, which won a Pulitzer Prize in 1996. He lives in Reading, Massachusetts, with his family. 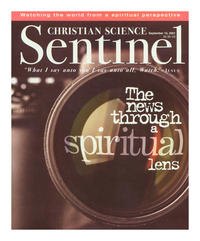