A conversation with a former US Army chaplain who served in Vietnam.

Will we ever feel safe again?

ROB GILBERT SERVED 20 years in the US military as an Army chaplain. Like most chaplains in a combat zone—in his case, Vietnam—he was called on to comfort soldiers paralyzed by fear of the unknown.

Since the September 11 attacks and the strike-backs that began October 7, Rob has talked to men and women in uniform, and has been approached by civilians of all ages who say they have never felt so afraid. "Will I ever feel safe again?" they ask.

Send a comment to the editors
NEXT IN THIS ISSUE
Article
FROM KAZAKHSTAN: A starting point for peace 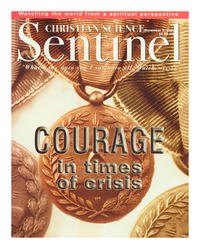