"Religion is an essential part of our lives that deserves careful and discerning attention on television," says Bob Abernethy, host of Religion & Ethics NewsWeekly. On the air since 1997, it is the only television newsmagazine that provides reports, news coverage, and insights into events and issues relating to religion and ethics. The award-winning program is aired on more than 200 PBS stations in the United States.

Among the topics planned for this season are religious views of capital punishment and how religion education is being incorporated into public schools in a way that is permitted under existing laws. 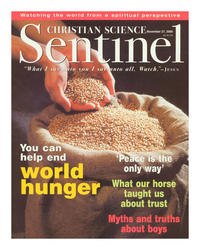