There's a Star Trek: The Next Generation episode from some years ago that I think of whenever I'm trying to define prayer. The captain is asking the ship's counselor (a nonhuman "empath," someone who can read thoughts) why she didn't know that his mind had been invaded by an alien being. She replied that the human mind often sounded to her like there was more than one person in there. She then asked him (in essence), "When you're trying to make a decision about something and you're debating with yourself, who are you talking to?"

I mulled over that one for days. In my many arguments with myself, who was I talking to? This inner struggle, this dialogue, was often the way I would eventually find an answer. After thinking it through point by point, sometimes amazed that I'd remembered certain things, or had my fears calmed, I would find an answer that felt good, that brought me peace. Was there Someone at the other end of the line I hadn't been aware of? 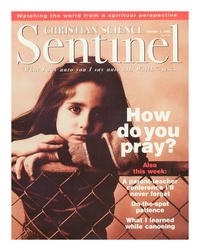