The keynote speaker at the opening session of the second International Symposium on Spirituality and Business, presented by Andover Newton Theological School, was Sylvia Hill, who has a shoeshine stand at Logan Airport in Boston. What she seldom tells her customers is that she has two college degrees, has edited one book and written another, and was once the director of human resources for the MBTA (mass transit system) in the city. "If I told them that, they would think I was lying!" she says with a laugh.

She was introduced to the conference as a person "whose business is to shine the tops of shoes but whose life is about shining people's souls." After hearing her speak, I just had to visit Terminal A at Logan Airport to have my shoes shined. 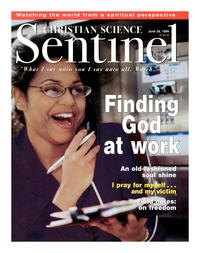