In Springfield, Oregon, it was a living prayer ... "Let It End Here." The words draped large and blue (Springfield's color) on a banner behind city leaders, as they met with townspeople the evening of May 22. Just one day earlier, a fifteen-year-old boy's shooting rampage had left four dead and thirty-two teenagers wounded.

"Let It End Here." Those are words of hope and healing. They envision an end to violence—not just in Springfield, but everywhere. Sadie Wilson, student body president of the high school where the shooting took place, said it another way: "May everybody heal and society learn from this tragic event that never should have been." 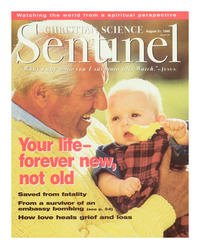