Courage to take a stand

When you are the "different drummer"

A Movie called Swing Kids, set in Hamburg, Germany, in 1939, tells the story of a group of teenagers who asserted their individuality during a time of Nazi-enforced conformity. These "swing kids," as they styled themselves, had long hair and were fascinated with American movies, British fashion, and swing music—none of which had the approval of the Nazis. Despite the danger involved, the swing kids refused to join the Nazi youth organization known as the Hitler Jugend, or HJ.

Things go along OK for a while; the swing kids are grudgingly tolerated by the authorities. But because of a childish prank, one of the members of the group, Peter, finds himself forced into the HJ. His best friend, Thomas, then joins out of camaraderie. They still despise everything the HJ represents, but they go through the motions of being good Nazi youth by day while remaining swing kids by night.

Send a comment to the editors
NEXT IN THIS ISSUE
Article
Beloved Christian Scientists,... 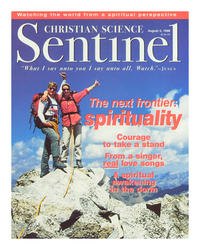