Are you a chicken or an eagle?

Several organizations around the world are committed to helping endangered birds survive and reproduce in the wild. Recently a television program related one organization's efforts with raptors, or birds of prey. It explained that great care was taken to make sure that the hatchlings understood they were eagles and not somehow related to people. They were fed by people, but the eaglets weren't aware of this, because the people stayed out of view and placed puppets that looked like full-grown bald eagles on their hands.

As time went on, the babies were placed in large aviaries along with full-grown eagles so they could learn, by example, to fly, hunt, make nests, and do all the things eagles do. Finally, when the hatchlings were full-grown, they were released into an area where they could thrive.

(Mark Swinney is a contributing editor.)

Send a comment to the editors
NEXT IN THIS ISSUE
Article
Outdoors, and Ouchless 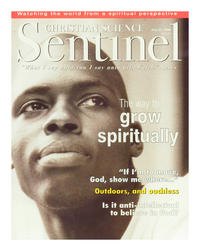