What I learned from a vow of silence

As a special project, my comparative religion class took a vow of silence for thirty-six hours. We had been studying what some believe to be the biological and physical effects of different religious practices, such as deprivation and overstimulation. Taking a vow of silence is considered by some to be a deprivation that alters both the senses and our state of consciousness.

Actually, as I thought about this exercise, it seemed to me that it was instead an opportunity to feel a closer relationship with God. In her book Science and Health, Mary Baker Eddy writes: "In order to pray aright, we must enter into the closet and shut the door. We must close the lips and silence the material senses" (p. 15). 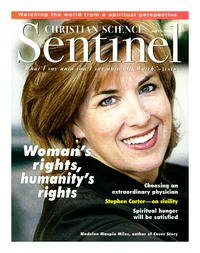