"There was something about that picture. I knew there was a message in it for me."

I opened the Sentinel. There was something about that picture. I knew there was a message in it for me. I saw a red sky at night, a sunset. Some clouds were partly hiding the sun; nevertheless, it was breaking through and shining with all its might. It conveyed to me a simile Mrs. Eddy used: "As a cloud hides the sun it cannot extinguish, so false belief silences for a while the voice of immutable harmony, but false belief cannot destroy Science armed with faith, hope, and fruition" (Science and Health, p. 298).

I had wakened two mornings before with a blocked ear. It was painful, and I was very deaf on that side. I knew I had to get close to God in prayer and listen to the Christ, God's message of love speaking to me, revealing my wholeness and completeness as His child. I prayed and listened over those two days, acknowledging my connectedness to God that could never be broken. Then I saw the Sentinel picture. Just as the sun and its rays were powerful enough to break through the clouds, so could the "voice of immutable harmony" break through any belief of life or intelligence in matter and communicate directly with me. Nothing could stop God from communicating with me. Then I heard a "click" in my ear. I could hear clearly. 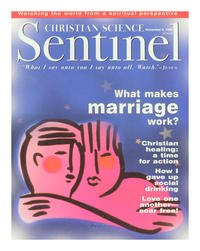