FOR several years my life was ruled by intense fear. There was nowhere I could go to get away from it. I woke in fear, lived every day in fear, and went to bed in fear. Driven by fear, I began making mistakes. I went from being considered one of the top, most promising people in my field to becoming almost a virtual outcast. In the process I lost my dignity, my integrity, my self-respect; and I came close to having a nervous breakdown.

During this time, I had a lot of opportunity to think. I began to see that my own fear was actually part of the general fear that goes along with the uncertainty of mortal existence—always subject to accident, chance, sin, disease, and, eventually, death. 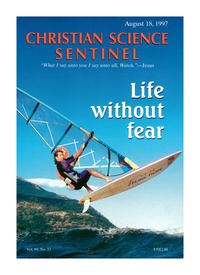