How did heaven begin?

In the ancient Near East, even before the Bible was written, heaven was thought of mainly as the sky. People believed a dome called the firmament spanned the earth, and that the sun, moon, and stars were embedded in it. Above the firmament was believed to be a heavenly ocean, and rain and snow fell to earth through openings in the firmament called the windows of heaven (see Mal. 3:10). Some ancient poetry describes the gods as living in or sitting enthroned upon the firmament, watching as people went about their daily activities.

Though early Christians often thought of heaven as removed from earth and as a future abode, they also believed its power and authority were present and at work in every aspect of daily life. 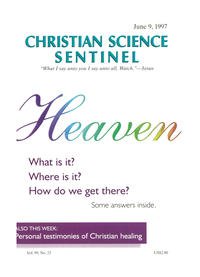