Some time ago I suddenly fainted

Some time ago I suddenly fainted. I felt quite strange when I came to, and so I thought a day off school would be wise. The principal of the school where I taught did not think this was adequate. We were in Africa, where many diseases cause a great deal of fear. She felt that because I was a Christian Scientist I would not handle the situation properly should it be what she considered serious. She sent a car, and I was taken to a doctor who, after many tests, declared I had the worst type of hepatitis. I had no fear of this word, but my colleagues were greatly distressed—one person had not been able to work for a year after having seven months off for this disease; another had been off for fifteen months before her family had come and taken her out of the country.

The doctor gave me a certificate for four months off and ordered complete bed rest. There was no medicine to take. I didn't feel particularly ill, just very strange, and my complexion was bright yellow. I asked the doctor how we would know when I could teach again. She said a blood test would show I was clear. I asked her for the referral for this, and she laughingly gave it to me—dated four months ahead.

Send a comment to the editors
NEXT IN THIS ISSUE
Testimony of Healing
When our baby daughter was about five months old, I noticed... 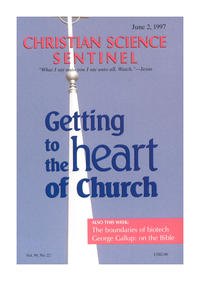