To adoptive and foster parents: what the Bible offers

She loved the Scriptural idea of "children of promise." He explored the meaning of God as Father-Mother. She studied the Bible story of Samuel's mother. He came to see parenting as stewardship. This spiritual search was their preparation during the long process of adopting a child. They were impelled by a yearning not simply to have a child of their own but to make a home for a young person in need. When the adoption agency asked if they would take a handicapped child from South America, they said yes to a seven-year-old girl. And a few years later, when she said she wanted to have a brother or a sister, they explored the possibilities of foster parenting. Now they are a family of five—having added to their home two foster children who needed shelter from a turbulent home in the United States.

As interviewer Sandra Peterson talked to adoptive and foster parents George and Mary Schultz, there was a very strong Biblical theme: all children belong to God, and not one of them is outside of His watchful care.

Send a comment to the editors
NEXT IN THIS ISSUE
Article
UPDATE: THE CHURCH OF CHRIST, SCIENTIST, MISSION LINE 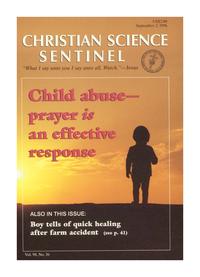