Recently a friend mentioned that a testimony of healing not...

Recently a friend mentioned that a testimony of healing not shared is similar to a Christmas present wrapped but not given. With this in thought I submit the following testimony of gratitude.

Early in our marriage, my wife, a Christian Scientist, accompanied me on a business trip. I was wakened early in the morning by her distress; she was coughing up blood. I was not a student of Christian Science at the time, and I insisted that we leave immediately for home, a hundred miles away, so that she could see a doctor. His diagnosis was a hemorrhaging ulcer, which might need surgery. At this point my wife told me that she would rather rely on Christian Science and she called a Christian Science practitioner to pray for her. This was all very new to me, as I had been raised in a very medically-inclined home. But I had read to her numerous times, at her request, from Science and Health and had found the book to be thought-provoking and logical. In a very short time she was completely healed. 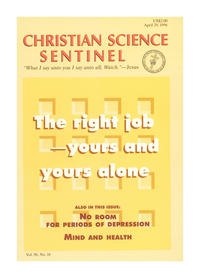