Why so many people are praying today

An article in USA Weekend pointed to a Gallup poll indicating that, in the United States, 90 percent of the population prays, with some three out of four Americans praying daily. Writer Jim Castelli observes: "Prayer isn't a game or a hobby; it's something that people turn to in order to get through the things that seem impossible to get through." Other reasons people pray, according to Castelli, include a desire for "acceptance and understanding" or to "express awe and wonderment" (December 23–25, 1994).

People also pray to give thanks to God, to praise Him, to seek divine guidance, to overcome sin, to find healing—not only physical healing but life-changing healing, in the broadest sense of the word. And prayer, of course, can take many forms. One might even say that it has as many forms as there are people who pray, for prayer is an intimate and entirely individual expression of one's relationship with God. And it would be presumptuous to claim that any one person's prayer is somehow "better" than another's. None of us can ever know what is in our neighbor's heart. And isn't it really those heart-motives and heart-desires that are so vital to the effectiveness of one's communion with God? 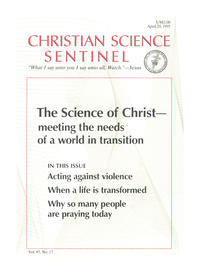