In an emergency situation, prayer based on the facts

Around the turn of the century a New York newspaper carried the following item. A man connected with a traveling animal show was sleeping on some blankets in a tent when he felt something crawling over his chest. He sprang up and threw off the creature, which, it turns out, was a huge rattlesnake. As he threw it off, the report said, he felt the prick of the snake's fangs in his arm. He ran out of the tent shouting for help—for a doctor or some medicine—but neither was available. The report said that onlookers, who were quite scared, watched as the man gasped for breath and appeared to be dying. In what looked to be the final moments, someone in the area announced that one of the pet snakes had escaped. He said it was an enormous rattlesnake but harmless, because its fangs had been removed. Indeed, the pet rattlesnake was found, lifeless, along a side of the tent. The source of the "snakebite"? It was discovered to be the prick of a sharp tack in a part of the tent's canvas. According to the report, in an hour "the man was as well as ever." (This article was also referred to in The Christian Science Journal, April 1895, p. 32.)

This experience certainly provides a vivid and important lesson on the physical effects of fear. But it should also cause us to think seriously about the need to eliminate fear, especially in emergency situations when it often seems that fear can take over.

Send a comment to the editors
NEXT IN THIS ISSUE
Editorial
Earthquakes, hurricanes, and prayer 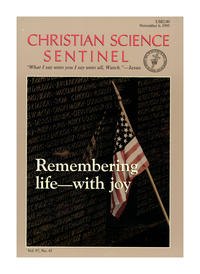