No penalties for trusting God!

My friend played goalie for his local ice hockey club—and loved every minute of it! When he moved to Australia with his family, he played lots of other sports, some of which were completely new to him, but there was no ice hockey.

With his return to the United States three years later, his love of hockey came right back. After my friend tried out for the local team, the coach said that he could come to practices, but thought there was little hope that he could make up for the years he'd missed on the ice. And the team already had a goalie. 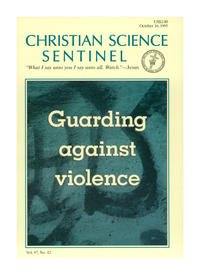