Recently the news media have pointed out the findings of psychiatrists who are noticing that more and more executives are complaining of aches and pains although doctors can find nothing physically wrong with them. Counselors report these managers are often frightened and depressed because they are looking at budget figures and making decisions about whom to fire, or they are worried about being fired themselves. These people seem literally to be worrying themselves sick!

This description was all too familiar to me. At one time the company where my husband was employed lost a major contract and began to experience difficulty. Company officials cut budgets and did some departmental restructuring in an effort to survive. Then one day my husband was called upon to lay off his entire shift of about thirty-eight men. It was a difficult experience, but we found that prayer works better than worry. 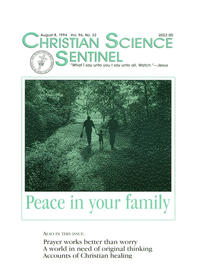