At one of my company's factories there was a lack of sales, and the transport contractors who dispatched our loads had insufficient work to keep all their vehicles active. They started poaching loads from each other, bribing dispatch staff to give them work, and bickering with each other. Also, many had purchased trucks on the basis of work related to our sales forecast, and they now had financial commitments but insufficient income to service their debts.

The situation came to a head. Yet before we all sat together at a meeting in an attempt to resolve the problem, I had prayed about the concept of man's link with his Maker. I reasoned that man's status as God's spiritual likeness is one of unity with his creator, and because there is only one creator, one genuine cause, or Principle, which is totally good, there can be only one effect —good. The inharmony, then, was really an outcome of the false belief that we could be separated from the source of all good. 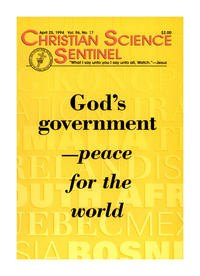