A promise was broken. Their Lord had failed. Many followers and close friends of Christ Jesus evidently felt these things following his crucifixion. For example, reading the Scriptural account of Cleopas's journey on the road to Emmaus (see Luke 24:13–32), we see clearly the dismay and discouragement he and his friend were feeling. Thinking they were explaining recent events to a stranger, not recognizing that they were actually speaking to the risen Master, they said sadly, "But we trusted that it had been he which should have redeemed Israel: and beside all this, to-day is the third day since these things were done."

Disappointment seemed justified; after all, Jesus had taught them about eternal life and had said that he would rise again three days after being crucified. The third day had arrived, and yet his followers weren't seeing what they hoped to see—the Master's triumph—so they were returning to their homes, sorrowful and disappointed. 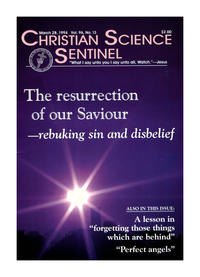