Fruitage from focus on Science and Health

Toward the end of World War II, I met a man who had been healed of a longtime stomach disorder by reading Science and Health. Not long after we met he gave me his very own copy! I did not know at that time of his healing, but by the way he spoke, I felt he was giving me a gift that was something very special. That night I started to read this book and had a wonderful sense of God as Love. Some months later this man and I were married. We moved to the suburbs and joined The Mother Church and a branch church. And we each took class instruction in Christian Science. My husband's gift is still having an impact on my life!

Very early in my study of the Bible together with its key—Science and Health—I began to receive calls for help through prayer. So I felt the need to increase my understanding of Christian Science.

Send a comment to the editors
NEXT IN THIS ISSUE
Editorial
Science and Health: an effective physician 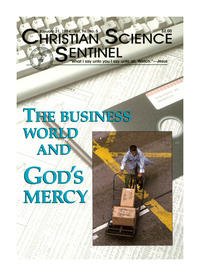