Before I found Christian Science, I believed medical science...

Before I found Christian Science, I believed medical science could help me; but when a doctor told me there was nothing more he could do to save my son, the future looked grim. I decided God must have something better for us than this—that He could not possibly require or allow death or loss. The memory had stayed with me of a time when my aunt, who had loved me even when I was unlovable, took me to a Christian Science Sunday School. I had decided Christian Science might be worth looking into sometime.

One day when working for a company in a distant city, I fell into conversation with a Roman Catholic, a Jew, and a Christian Scientist. We compared religious views, and again I was led to believe Christian Science had great value. I started studying it. At first my husband was very hostile about this, and I had to abandon the study. Later I was able to study without verbal interference, and I never forgot my impression that Christian Science teaches the truth.

Send a comment to the editors
NEXT IN THIS ISSUE
Testimony of Healing
This testimony is long overdue, but it confirms my great... 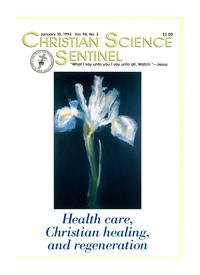