Clarification on legal rights and the free exercise of religion

In the November 1, 1993, issue of the Sentinel, an excerpt of a 1991 article from the New York Law School Law Review was printed. The article highlighted the United States Constitution's "free exercise" of religion guaranty and its application to the practice of Christian Science healing for children. The excerpt also included the author's conclusion that American courts should acknowledge greater protection for Christian Science practice, under the "free exercise" clause of the Constitution, than lately they have seemed inclined to do. We agree with the author's conclusion, but it is important to point out that the legal landscape in the intervening years has changed from what was reflected by the 1991 analysis.

In 1991, the United States Supreme Court (in a case having nothing to do with Christian Science) significantly altered prior legal interpretations by ruling that a state may enact a law that incidentally impacts the free exercise of religion without first showing that the law advances a compelling governmental interest. Before the change instituted by the Supreme Court, constitutional scholars understood the law to require a showing of compelling need in order to justify even moderate intrusion into religious practice. Broad public concern, led by much of the nation's religious community, followed the Court's decision. Recently the Congress enacted, and the President signed, the "Religious Freedom Restoration Act of 1993." This new law states in part that "Government shall not substantially burden a person's exercise of religion. ..." There is an exception which states that the "Government may substantially burden a person's exercise of religion only if it demonstrated that application of the burden to the person—1) is in furtherance of a compelling governmental interest; and 2) is the least restrictive means of furthering that compelling governmental interest." 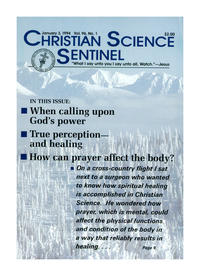