"A little learning is a dangerous thing" wrote Alexander Pope. Most of us have probably proved this for ourselves! A friend of ours, for example, tells the story that when he was a boy, he saw a television show describing the process of pouring molten metal into molds. Guess what? He decided he could make fishing weights the same way! So he collected lead tire weights found on the street and melted them in a heavy saucepan on the kitchen stove. (His parents, of course, weren't home.)

Well, the pan was pretty heavy for a boy, and when he poured the hot lead into some crude molds he had made, it spilled onto the linoleum kitchen countertop. He poured water onto the burn, stared at it for a while, and went out to sit on the curb in front of his house. He said he wanted to be sure he met his parents before they went inside. Years later, his father still looks off into the distance and frowns whenever someone brings the episode up. A little learning surely wasn't enough in this instance! 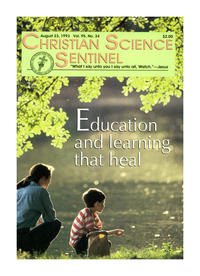