Recently , a friend was telling us about a discussion he had with some other students of Christian Science. "We were talking about God as our Father-Mother," he said, "and I didn't know there was something wrong until a young woman banged the table saying 'I can't stand it. Don't call God, Father. My father abused me.' Then she wept.

"Never before had Jesus' words 'call no man your father upon the earth: for one is your Father, which is in heaven' meant so much to me. There was a long pause, a lot of prayer. Then we backtracked quite a distance and began to reconsider the holy relationship we have to God. We began to investigate the true nature of man and woman in God's likeness. Uncontaminated. Undefiled. Forever filled with the pure goodness of God. 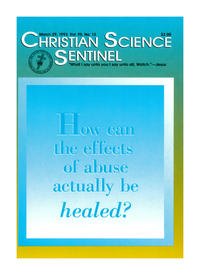