The potential and possibilities of God's child

In recent decades, some of the schools in the United States began experimenting with an unconventional way to sort and classify students. Children of the same age were segregated into groups by what was perceived to be their intelligence and learning ability. The kids caught on to this very quickly; it was easy for them to tell just which students the teachers thought should do well in class, and which ones shouldn't.

The classification of some students as inadequate surely gave them a high hurdle to jump, but whether or not a child warrants extra help with his or her studies at a particular time, that child never deserves to be pigeonholed publicly as a slow learner. While it is important to address the needs of each student, and never to ignore difficulties, no child needs to carry the extra baggage of being openly identified with what are judged to be lesser learning capacities.

Send a comment to the editors
NEXT IN THIS ISSUE
Testimony of Healing
Before I began studying Christian Science in 1989, I was... 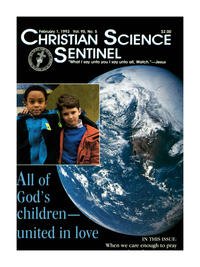