"I was walking on a crowded street in a large European city. Suddenly I heard footsteps behind. This was surprising since there were people all around. Then I felt that God was directing me to leap to the side of the walk and get as close as possible to a building. I hesitated since this seemed like such a foolish thing to do right in front of everyone.

"I did it anyway and saw a man lunge past with his arm raised to hit me and then probably to take my purse. I prayed to know what to do when he turned around and stopped right in front of me. I quietly walked into the middle of bumper-to-bumper traffic moving slowly along the street. Then the man tried to take another man's wallet but was quickly apprehended, and people went along with their business. I really felt the protecting power of God." 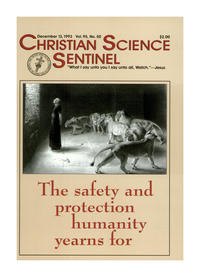