Each one of us can make a difference in support of righteous and effective government.

Democratic societies are established on the fundamental concept of representative government deriving its power from the consent of the governed. The primary relationship between the governed and their representatives is symbolized by the ballot box. Here the individual fulfills a vital role in participatory government.

But what if confusion and manipulation threaten to undermine the election process? What if political campaigns appear to promote unsavory tactics and slick imagery rather than solid platforms? Just as every member of a democratic society has the right and responsibility to cast a vote, each one has an equal opportunity to pray for the electorate to be guided by divine wisdom, to pray for good government and for leaders with integrity. In fact, such prayer can be viewed as an essential duty. 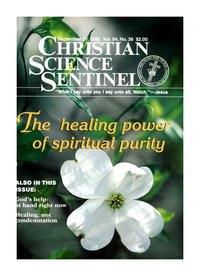