Do you need more courage?

Cultivating a deeper trust in God, we naturally find the courage to move forward under His guidance.

Have you ever thought that some people are brave and some are not very brave, and that you are in the second group? If so, there's a helpful message in the Bible in the book of Joshua. Instructing Joshua to lead the Israelites forward into the Promised Land, God is represented as saying, "Be strong and of a good courage; be not afraid, neither be thou dismayed: for the Lord thy God is with thee whithersoever thou goest."

Forty years earlier, the Israelites had stood on the threshold of this wonderful, fertile country. Twelve men had been sent to find out what conditions were like. The Old Testament book of Numbers tells us they returned speaking of the luxuriant crops—grapes, pomegranates, figs—which grew there in plenty. But they also described the inhabitants of Canaan as "giants," while "we were in our own sight as grasshoppers." 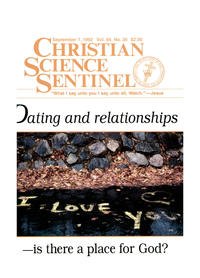