"The US Constitution" by Norman Cousins—September 17, 1987

"...When Ferdinand Magellan and his crew landed on the shores of Tierra del Fuego, what surprised them most was that the natives had not seen the ships sail into the harbor. Magellan finally realized that even though the ships were in plain sight, there was nothing in the experience of the natives that could give reality to such large floating objects. Canoes represented reality and limited not just their sight but their imagination. He helped to unblock their vision by proving to them that his ships were not only visible but made waves and threw shadows.

"The greatest gift of all conferred by the Founding Fathers on the American people was to unblock and enlarge their vision. They made it possible for Americans to see possibilities they had never seen before, to dream dreams they had never dreamed before, and to apply free will and intelligence in ways that had never been collectively applied before. They enabled human beings—not just in America but eventually throughout the world—to see that history is what people make it."

Send a comment to the editors
NEXT IN THIS ISSUE
Article
Gracious accepting: an important part of healing 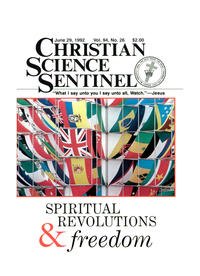